On the topic of Destroying the Institution of Heterosexual Marriage 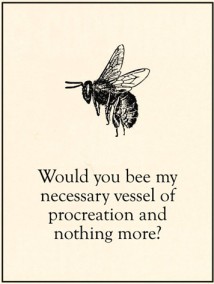 An argument I frequently hear against marriage equality is that marriage exists primarily as a heterosexual institution for the purpose procreation. This usually comes up after I’ve pointed out that marriage in its current form is relatively new and there are a lot of differences between modern marriage and traditional marriage already.

Marriage seems to be generally accepted by both sides of the discussion as a union between consenting equals. As such, it is not a millennia old institution but a modern interpretation and would not involve pets, children, or inanimate objects. Slippery slope arguments which suggest otherwise really are quite dismissible. For the sake of conclusiveness, those and other arguments are addressed here.

Earlier interpretations of the definition of marriage in the West including adults marrying 12 year olds as late as the mid 1800s’ when special interest groups pressured the government to establish a minimum age of consent. Go back further and it was common and acceptable for wealthy men to take several wives. The definition of marriage has changed many times and contrary to popular belief, the majority of human history did not define marriage as between one man and one woman for life.

Marriage has been redefined constantly throughout history. The institution which our ancestors called marriage would be considered appalling to most conservatives these days, as will this current debate appear to future generations.

Before the rise of the Holy Roman Empire, Roman and Greek same-sex unions were common with as much range of ceremony as formal and informal marriages of the time.

Marriage became an exclusively heterosexual privilege in the West in 342 AD when the Christian emperors of Rome abolished same sex marriage and ordered all such married couples to be executed. The Canon of Same-Sex Union came much later and while being a church ceremony uniting two members of the same sex for life at the exclusion of all others, it avoids any suggestion of becoming one flesh and refers primarily to a spiritual union.  Stories from the Song Dynasty show that same-sex, marriage-like relationships are not limited to Europe. There is strong evidence that same-sex marriage was common across Mesopotamia in pre-Christian times.

So no, marriage is not exclusively symbolic of an inherently reproductive relationship. Adding same-sex couplings to the institution can no more destroy the institution than removing same-sex coupling from the institution could have destroyed it when that change occurred. The only thing which is destroyed by allowing marriage equality in a modern context is the heterosexual privilege which was established in the West during the waning days of the Roman Empire. It is heterosexual privilege which is the aberration in modern marriage, not the threat of removing it.