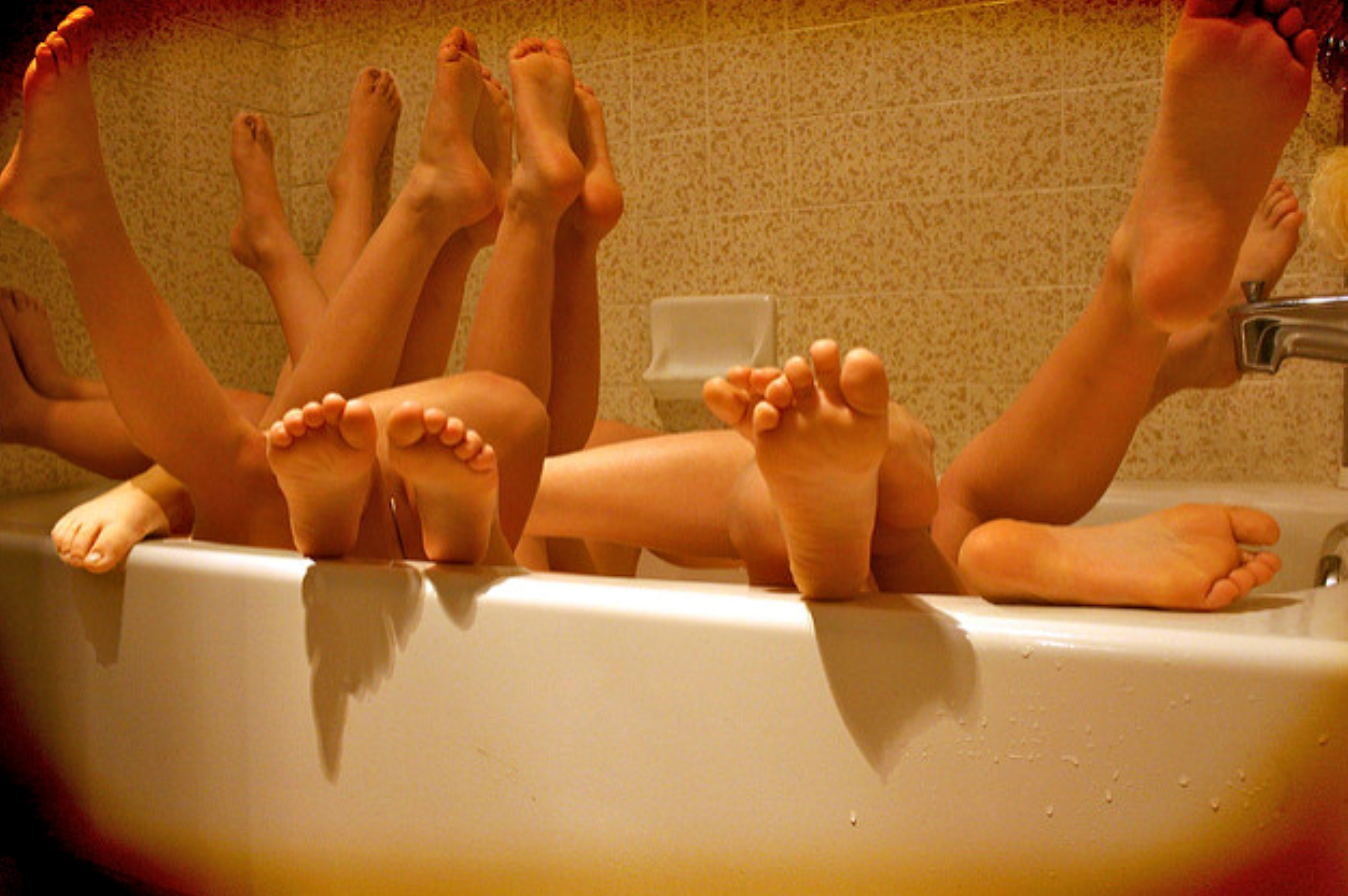 Articles about polyamory often start with a picture of six or more feet sticking out from under an invariably white blanket and will go on at length about how polyamory compares to monogamy as though it is some wild new idea that people are trying out in comparison to monogamy which has remained unchanged since ancient times. It seems like very little is known about polyamorous people aside from their inability to pick out appropriately sized bed linen. In this article, we bring the multi-lens of Jaminology into focus and jump feet first into the diverse range of non-monogamies in an attempt to dispel some old myths and maybe create some new ones.

Since monogamy is often treated as the default setting for relationships, the idea of this ubiquitous model of romance needs to be addressed first in order to give non-monogamy a fair hearing.

A lot of religious imagery about monogamy talks about “becoming one flesh” which served an important cultural need at a time before paternity tests and birth control. The idea being that a woman can’t be having sex with more than one man (outside of specific sanctioned contexts like in Genesis 38) or there will be confusion. The taboo of infidelity never really applied to men in quite the same way historically and most ancient cultures which promoted monogamy also had widespread polygamy (one man with multiple wives and/or concubines) and this wasn’t considered inconsistent with the purpose of monogamy.

Monogamy in a modern context is vastly different to traditional monogamy. By the modern definition you can have as many partners as you like of any gender, race or social class as long as you only have one at a time. While you are “single” you can have a string of one night stands and that is acceptable as long as you aren’t organising your next hookup before you’ve severed ties with the last one. Having sex with a stranger at night when you broke up with your long term partner over lunch is encouraged. Having sex with a close friend hours after a break up is wrong …unless it was your ex-partner who initiated the breakup, in which case your friend is still a jerk for taking advantage of you and not encouraging you to have sex with a stranger but you are morally justified. If you are in a relationship with one person and then meet somebody you prefer and have sex with them, you are still monogamous if you tell the first partner before having more sex with either of them. If you go back to the first partner after confessing then you can’t keep having sex with the second one. Really, modern monogamy is largely defined on a technicality.

Polyamory is distinguished from modern monogamy by the fact that it removes the requirement for technical monogamy. Really that is it. There are still all the same arguments, poor communication, delusions of permanence, guilt, jealousy, pain, forgiveness, trust and love as other relationships. The only universal distinction between monogamy and polyamory is that starting a new romantic relationship doesn’t necessarily require ending another.

This Little Piggy’s on the Market

For many people, their first encounter with non-monogamy involves some form of deception. There are some established rules that were agreed to in a relationship either explicitly or by implication, and somebody broke those rules by cheating on their partner with somebody else. It is therefore necessary to establish a distinction between consensual non-monogamy and cheating.

Cheating is a situation where there were rules that were agreed to and were then broken. Consensual non-monogamy is a situation where different rules have been clearly communicated with all parties and everybody involved has entered into this agreement with a clear understanding of these rules. This may take the form of an open marriage or open relationship, where sex outside of the relationship is acceptable but there is still an expectation of emotional exclusivity; or it may take the form of polyamory where each partner has the option to have multiple sexual and romantic relationships. The specific form of these agreements will vary from relationship to relationship but what is consistent across all of these relationship models is the need for constant communication and personal ownership of emotions like jealousy.

This little Piggy Gets All the Beef

This Little Piggy gets None

While polyamory may be the result of somebody wanting multiple sex partners, the reasons for it are vast and varied. For some people, the appeal of polyamorous relationship models has nothing to do with wanting multiple partners but is about managing security and jealousy. People in monogamous relationships can understandably become jealous of people who are similar to themselves interacting with their partner because the modern expression of monogamy means that a person who is in an existing relationship who finds themselves developing romantic feelings for somebody new must either suppress those feelings (which can lead to resentment) or act on those feelings by breaking up with their current partner or cheating on them. As such, a person in a monogamous relationship is in direct competition with every other person in the world that their partner may become attracted to.

So while many monogamous people would say “I am too jealous to ever be in a polyamorous relationship” many poly folk would say the same thing of monogamy. A key component of the philosophy of modern consensual non-monogamies is the idea that no one person is capable of meeting all of another’s relationship needs, and it is unrealistic to expect somebody to change themselves to do so. Jealousy is something which happens in any relationship model and it is up to the people experiencing the emotion to acknowledge that their feelings are their own responsibility and don’t necessarily impart the right to dictate the actions of their partner in any ethical partnership.

For a lot of people involved in various forms of consensual non-monogamy, new relationships can provide excitement and intense emotional experiences while their established relationships provide stability and long term companionship. For many people who don’t want to choose between excitement and stability, polyamory is a solution which doesn’t require cheating on their partner. In saying that, infidelity does still happen in polyamorous relationships and people in multiple relationships are not entirely insulated from the dangers of relationship betrayals.

In GLBTQ+ communities there is an observed phenomenon referred to as “compulsory heterosexuality”. This is primarily observed in women who are culturally conditioned by society to believe that they are heterosexual and that the strong emotional feelings they experience towards other women is intense admiration rather than romantic attraction. This leads to a lot of women believing they are heterosexual until later in life when they realise they were lesbians the whole time. While it is important to clarify here that polyamory is not a sexuality, there is an observable phenomenon in western cultures of “compulsory monogamy” where people will follow a pre-determined model of what they have been taught that romantic relationships are supposed to look like.

Because of this tendency to default not only to monogamy, but to a very specific form of monogamy, it is important that people in any kind of relationship examine and discuss their expectations. You may well decide together that the standard model of monogamy is the ideal model for you, or you may decide that you want something different. The great thing about being an adult is that you are no longer obliged to order your life around the expectations of others. If you want cereal for dinner, you can do that. If you want to eat bacon pancakes every day, nobody is stopping you. If you want to model your relationship on the relationship model your parents had, that is completely acceptable. If you want to create a kind of relationship arrangement that nobody has even developed a name for yet, it is completely up to you. But, whatever you decide to do: make the decision a conscious one.

Ultimately, the message to take from all this isn’t that polyamory or monogamy is the best kind of relationship, but rather that there are many different forms that a romantic relationship can take and the specifics of what is or is not permitted within a given relationship are the responsibility and choice of the people in that relationship to choose.